The Kansas Jayhawks basketball team has unveiled new uniforms for the year.

You can read the details of the changes via a release from KU Athletics.

Here's a look at Josh Selby in his: 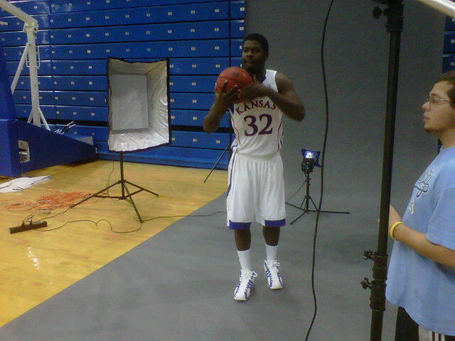 KU players will be talking to the media about the upcoming season. Josh Selby's status is the big topic but there's no new news there.

Here are a couple of updates on what Bill Self had to say from the Lawrence Journal World:

Self says his team will be more athletic this year than it has been in the last few years.

Without question, Self thinks his team's speed will be one of its strengths. The Jayhawks will be able to pressure more defensively this year.

Make sure to check out the full LJ World story. Lots of good stuff in there.

Here's a snippet from the KC Star:

"Kansas math is unique," Self said. "My first year here, you lose (Nick) Collison and (Kirk) Hinrich, but you're supposed to be better. That's Kansas math. It's kind of the same thing this year. You lose those three, and how could you expect to be better? But I do think this: 33-3 is a pretty good winning percentage. I don't think this team will do that. But I do think this team can be as good a team as what last year's team was when it counted the most."

J. Brady McCollough has a story worth reading.

KU basketball is getting closer....

Late Night At The Phog: What They're Saying About Kansas Basketball