Share All sharing options for: 2010 MLB Draft: Royals Fans Say The Pick Should Be Yasmani Grandal

The MLB Draft will be starting momentarily here. In the meantime, let's take a peek at who the Royals fans want to select with the fourth overall pick.

By a landslide, it's C Yasmani Grandal, according to a poll on Royals Review. 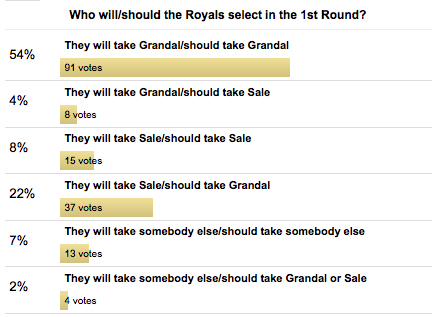 The Royals have been linked to Grandal and as recently as this morning he was the favorite, per various reports. If the Royals are going on a need-based approach, then Grandal makes sense.

He appears to be the total package (but aren't they all before they hit the pros?). Grandal is the name most often connected to the Royals.

The Royals are believed to have a deal in place with Yasmani Grandal for the fourth overall pick, industry sources tell Frankie Piliere of Fanhouse.com (via Twitter).  Yesterday, an MLB executive told ESPN's Keith Law that Grandal is looking for "Buster Posey money".  Posey received a $6.2MM bonus from the Giants.

Kansas City has been linked to the catcher since April when it was first rumored that they were looking at him as a candidate for the fourth overall pick.

This afternoon, though, there are reports heating up that LHP Chris Sale might be the pick.

For more on the draft, check out SB Nation's Royals Review.