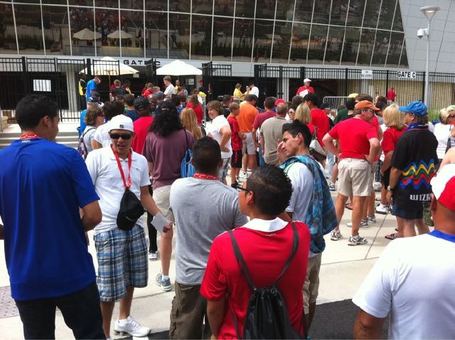 It's Sunday at Arrowhead Stadium and the grills are smoking and MLS soccer fans are streaming into the stadium for today's match between Manchester United and the Kansas City Wizards.

Judging by pictures being sent out on Twitter and Joel's updates (He's at the game), it seems like it's business as usual at Arrowhead Stadium. The game starts at 5 PM central time. Here are some tweets being sent out from people at the game:

Kansas City is the third stop on Manchester United's tour of the United States and Canada. Man United beat Celtic 3-1 two Fridays ago in Tornoto and a late goal was enough for them against the Philadelphia Union just a few days ago.

Manchester United's web site is streaming the game live so make sure you check it out if you're not near a TV. We'll have updates and scores after the game starts.

Any predictions before the game? How much of a chance do the Wizards have?