The Chiefs kicked off training camp on Friday with a mix of indoor and outdoor practice.

When they began practice it was raining so they started things indoors. If you're a fan, this is the boring part of practice as they're doing mostly position drills and walk-through stuff.

Not a whole lot of insight to be gleaned from those sessions but I found it interesting watching the defensive line.

The crack of the helmets when they're doing normal drills is amazing. The grunting, pushing and hustling...it's impressive seeing that kind of movement from 300+ pound players.

After the indoors session, and the rain cleared up, the Chiefs moved things back outdoors to get some work in. 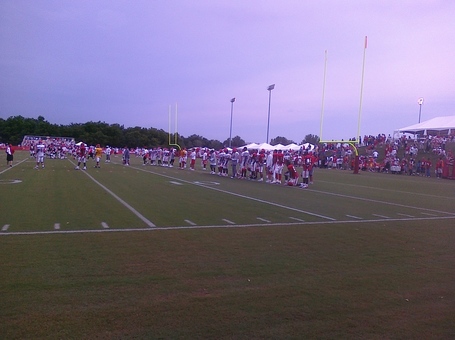 The big note is that Eric Berry was not in camp. He hadn't yet officially signed his contract so he wasn't out there but Brandon Flowers told us he expects Berry there on Saturday. The Chiefs also made it official with him late Friday night so he will most definitely be there.

Jamaal Charles returned from a shoulder injury that kept him out for all of OTAs. He had surgery on the shoulder back in January and he said he could've gone in OTAs but they kept him out as a precautionary deal. 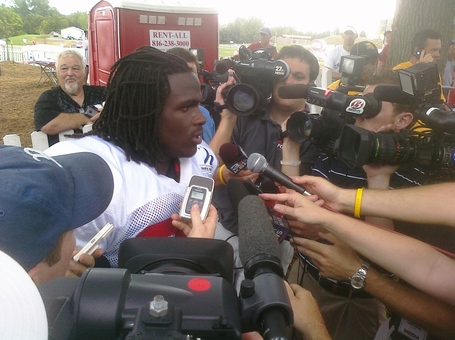 He looked fast, as usual. Thomas Jones started team work on the first team but I wouldn't read much into that. Charles was looking good.

Dwayne Bowe had a very good day on Friday. He had a handful of solid catches including one that saw him plant his feet on the sideline and fully outstretched to make a grab. It was concentration, focus and athleticism.

Bowe didn't speak to the media and went running by us. 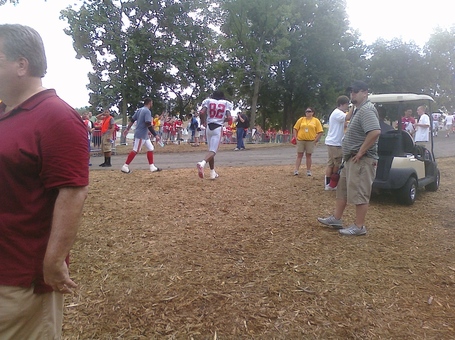 Three players sat out of practice: Brian Waters, Dion Gales and Ikechuku Ndukwe. Early speculation amongst the media was that they all failed the conditioning test on Thursday. Waters didn't pass the test last year so we figured it was the same this year.

We're not sure if Gales and/or Ndukwe failed the test -- it certainly seems that way -- but Todd Haley said Waters did not fail the test.

Waters came walking back up with his ankle wrapped in ice and Haley insinuated there was some sort of injury with Waters. We're not sure what's up but it doesn't appear serious.

Cameron Sheffield is no Dez Bryant. If you'll recall, Bryant got some publicity this week after he refused to carry one of the veterans pads to the locker room, a long rookie "hazing" tradition.

Sheffield was asked to do the same thing and, well, you can see that he did it. Those look like Jovan Belcher's pads he's carrying. 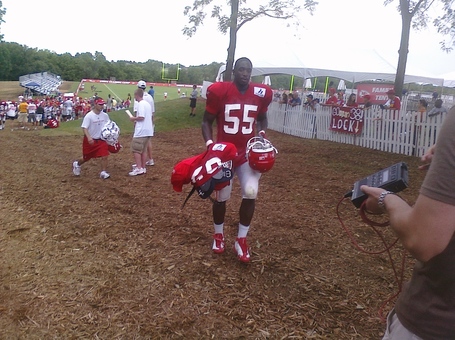 The Chiefs are doing a new thing where they let kids each day carry the players helmets on the walk back to the locker room. A few players were doing that with kids and it was a cool sight to see. 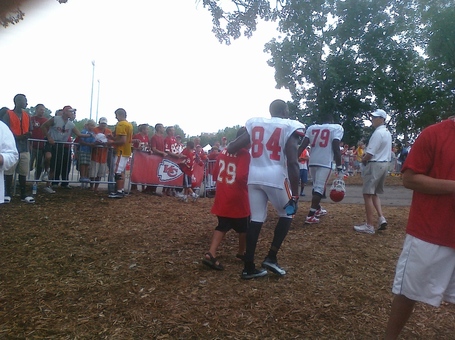 The Chiefs say over 3,000 fans showed up to day one of training camp.

A few players and Haley talked about how the fans energized them. Haley said it's easy to get fired up for day one but on day 14, 15 and 16 those fans will come in handy getting the players fired up to play. 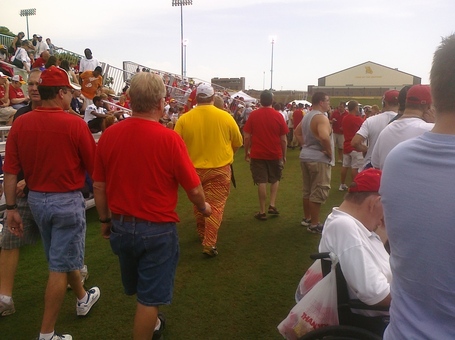