Dwayne Bowe is usually one of the more fun interviews on the Chiefs. He's pretty charismatic and likes to talk at times. Unfortunately, we haven't heard from him in the first three days of camp. He seems to really be focused on the field because it's showing.

He's been one of the early stars at training camp. He's in good shape, cutting well on the field and making the vast majority of his catches. 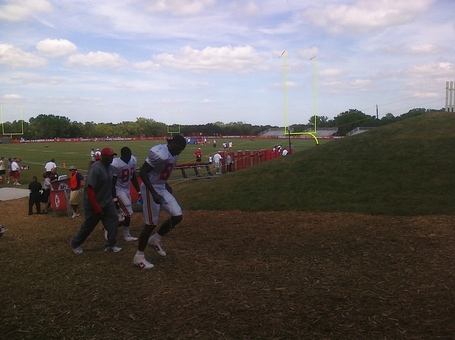 McCluster and Bowe are two fan favorites. He put some nice moves on Eric Berry in drills on Sunday. In a receiver vs. defensive back drill, McCluster was nearly unstoppable because he's so fast in and out of his breaks.

That said, after Bowe scored a touchdown at one point in practice, he and McCluster did some sort of "showboating" though I couldn't quite make it out. Todd Haley told them to cut it out and brought them both over for a quick talking-to. 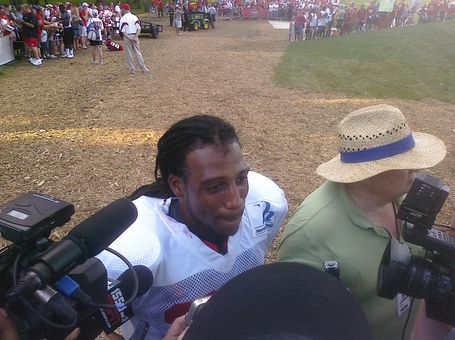 Charlie Weis is using a combination of a motorized cart and a cane to get around because of "an 11th hour" knee surgery. But that doesn't mean the players still don't hear him.

Other than a McCluster juke or a Berry interception, nobody got more cheers than Weis when he would yell at a player. He yelled at one point Tyler Palko was "0-for-August" during a quarterback drill.

I'll admit I didn't expect Rudy Niswanger to start off on the first team. But after hearing Scott Pioli and Todd Haley talk last week, it makes sense.

Pioli said not too look too deeply into training camp depth charts because sometimes veterans (he used Jon McGraw as an example) understand the ins and outs of the defense while a rookie (Kendrick Lewis in his example) does not so naturally the rookie would get more time.

That might be the case with Niswanger. We'll see if/when Wiegmann sees first-team snaps.

DJ and Belcher hop on the first team

During team work on Sunday, Derrick Johnson and Jovan Belcher were on the first team. That pair has been rotating with Demorrio Williams and Corey Mays.

DJ and Belcher bring a little more excitement to the crowd but I will say that Williams had several big stops today.

Asamoah in at right guard

Jon Asamoah, rookie third round pick, played at right guard today. He has seen time on the left side as well.

He's at least third down the list. Brian Waters is out and Daryl Harris is taking Waters spot. Ideally for Asamoah, he moves ahead of him. 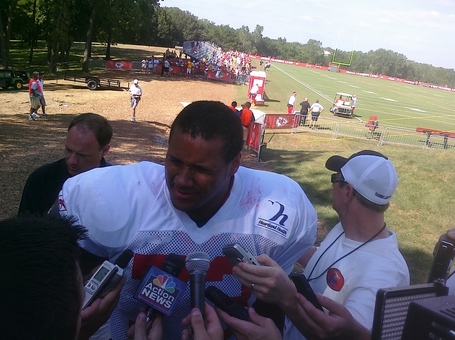 Ron Edwards has been running on the first team nose tackle all weekend.

His backups, Shaun Smith and Derek Lokey, have split some time there. Smith had a solid showing on Saturday earning some praise from the staff. Lokey got into it today with Ikechuku Ndukwe. 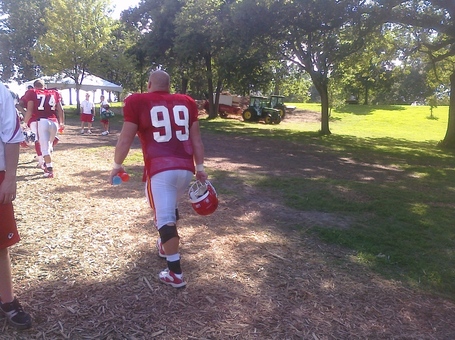 My guess at the top three receivers

McCluster's getting hyped up by the crowds at training camp.

There are quite a few fans that show up and they do cheer when players make a great catch or bat a pass down. Players have interacted with the crowd occasionally but most keep their focus on the field.