The 2011 Super Bowl halftime show featuring the Black Eyed Peas, Slash and Usher has fans divided -- or so I thought. From what I could hear from fans, most didn't like the halftime show but I figured that was because the cool thing to do these days is bash the halftime show.

When put up to a vote on ESPN's SportsNation, the majority of people graded the halftime show... 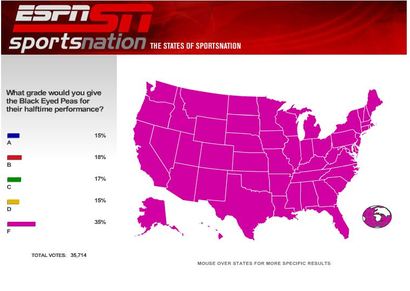 I have zero musical abilities so, honestly, I couldn't tell you if something is good or not. I was at the game and the performance -- the flashing lights, people in white suits running around, and seeing the Black Eyed Peas come down from the JerryTron -- was pretty cool. The music? That's for you to decide.

(H/T Arrowhead Pride for the image)