In today's "Three Thunder Thoughts" we highlight the unselfishness of Russell Westbrook, the shoes every kid should have on the Christmas list and a trade that the Thunder brass should consider.

I'm going to share something about myself that you may not know. Before I was a fan of the Oklahoma City Thunder, I was a fan of the Seattle Supersonics. Irony, right? Well, I come from a military background, and my family has been dispersed all around the country in the process. My Uncle Bill has always been like a big brother to me, and he was the first one to expose me to the Sonics. Therefore, when I was at the ripe old age of 6, I was ordained as a fan of the Sonics.

I say all of that to you to say the following. For Thanksgiving I'll be taking my talents to Seattle to visit my family in the Pacific Northwest. When I get off the plane, I plan on wearing an Oklahoma City Thunder shirt similar to this one, except it'll be representing Kevin Durant instead of that turncoat Benedict Arnold James Harden.

The Unselfish Russell Westbrook: In a season where Russell Westbrook's having to adjust to life without his favorite bearded guard by his side, be aware that Westbrook is averaging a career-high in assists (8.4) and a career-low (2.8) in turnovers. That's three more assists a game than the 2011-12 campaign and its proof that Westbrook's trying to share even more, albeit with a small sample size.

Can Someone Please Get Me The Nike KD V "Glow-In-The Dark" editions on Nike ID?: Hey guys, I just wanted to let you all know what I want for Christmas. The NikeID KD V's that GLOW IN THE FRIGGIN DARK! Look, I wear a size 13. If you ladies out there (all three of you, including my mama who reads my work...hi Ma!) would like to acquire these shoes for me, I can make a phenomenal grilled cheese sandwich and will wash your car a few times a month. I also do well in mowing the grass on the occasion. 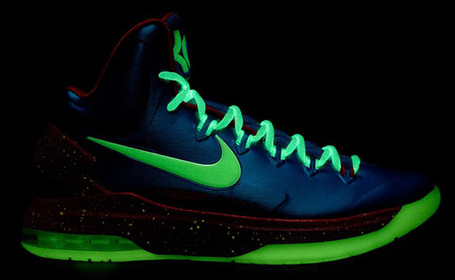 Why do I want these? Because I want to wear these in the club and other dark places where lots of people are around so my shoes can be the light that shines! Duh!

Should The Thunder Trade For Anderson Varejao? Just mull the words of Angelo Benedetti of Fear The Sword over as he contemplates a potential trade between the Thunder and the Cleveland Cavaliers:

Unless, of course, they can trade Anderson Varejao for some lottery picks. Thankfully, unlike with Ramon Sessions, there are teams that could really use a guy like Andy that have quite a few nice picks that can be offered. The one that stands out the most to me is Oklahoma City. With Kendrick Perkins looking about as bad as a typical Perkins restaurant menu, they could really use a new center. Think about how great Andy and Serge Ibaka would look as a front court. Now look at see the picks that OKC has stashed away. The Dallas Maverick's first round pick. The Toronto Raptors first round pick. The Charlotte Bobcats second round pick. Sure, the Mavericks pick is top 20 protected, but the Raptors pick is only top 3 protected. Even better, it's guaranteed to be a lottery pick because it's also 15-30 protected. That could be pretty useful.

Excuse me for one moment, I need to pick up some of my brains off the ground as my head exploded.

I'd never thought about that type of deal at all. An opportunity to off-load Kendrick Perkins and draft picks for the irritant of all irritants in Varejao? The rebound gobbler? The King of Post Moves Sideshow Bob hair? YES YES YES! Of course, I don't think it'll happen, as the Cavaliers would basically be saying that they're going to mortgage their future for the next 2-3 years by trading Varejao for a glut of picks. (It'd be smart, but I don't know if they do it.)

Would Sam Presti do it? With the lack of productivity currently coming from the center position, he'd have to consider it. He's shocked us once before, maybe he'd do it again.