When you think New York Fashion Week, you probably think it's a swirling mess of models, designers, retailers, movie stars, musicians, NBA players, and ... wait, what? 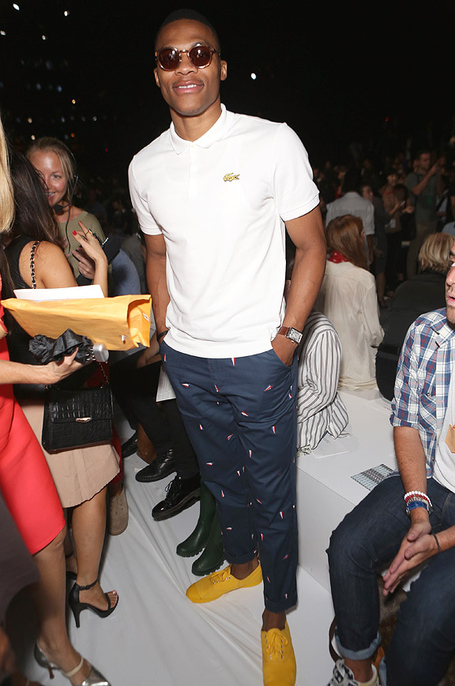 Oklahoma City Thunder point guard Russell Westbrook made an appearance at this year's formal flaunting of fabric, along with Tyson Chandler and J.R. Smith of the New York Knicks.

Russ kept it clean up top with a white Lacoste polo, and paired it with some navy high water slacks that someone had apparently decided to hang the contents of their tackle box on. He also wore his sunglasses indoors, presumably to keep from blinding himself with his BRIGHT YELLOW SHOES.

Westbrook is no stranger to fashion -- if, uh, that's what this is. He's made quite a name for himself with his Steve-Urkel-meets-Pharrell-Williams-meets-a-preschool-fingerpainting-project postgame news conference attire. And what better place to pick up ideas for next year's NBA season than New York Fashion Week.

Hopefully he found some better faux-eyeglasses than the Sally Jesse Raphael model he donned last year.

For more on the Oklahoma City Thunder, join the discussion at Welcome To Loud City. For all of your NBA needs, keep an eye on SB Nation's dedicated NBA hub.