On Friday night the Missouri Mavericks of the Central Hockey League lost to the Quad City Mallers, 4-3. As part of a Sports Night promotion the Mavericks wore Kansas City Chiefs themed jerseys and auctioned them off after the game.

Here are the jerseys: 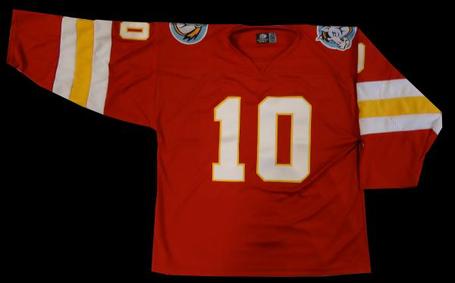 My question: Which Chiefs player would make the best hockey player? I think Mike Vrabel is up there. I don't know why He just gives me a hockey vibe. Shaun Smith doesn't mind mixing it up so I could see him (although not at 350 pounds). Brandon Flowers seems like one of those guys that's good at everything.