In addition to ESPN's stunning portrait of the city of Joplin, Missouri's recovery from a tornado on their "Outside The Lines" program earlier this month, tonight's pregame coverage of the Chiefs / Chargers Monday Night Football game included a new piece from Rick Reilly focused specifically on the football team at Joplin High School.

Some, like Quinton Anderson, lost both of his players and his ability to play this season after suffering a broken back in the storms. Anderson was featured in Reilly's piece, as well as a profile in today's Kansas City Star. Among other endeavors, the Chiefs are supporting the victims of the Joplin tornado, as well as tornado victims across Kansas and Missouri, with a special Chiefs Community Caring t-shirt, which goes to aid relief efforts. 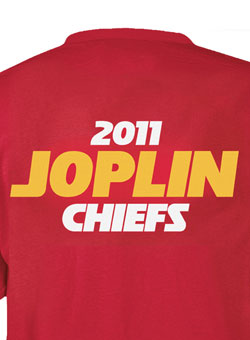