Despite Jamaal Charles, Chiefs Are 20th Most Popular Team In Madden 2011

Share All sharing options for: Despite Jamaal Charles, Chiefs Are 20th Most Popular Team In Madden 2011 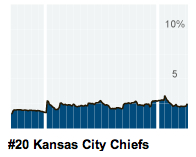 The Kansas City Chiefs weren't as popular on Madden 2011 as I would have figured. According to a report in the NY Times, the Chiefs were the 20th most popular team in Madden last year. That number is a little surprising to me considering RB Jamaal Charles was on the team. He's a fast running back which is one of the most popular type of players in Madden so I figured more people would play with the Chiefs (I know I did).

You can see a couple of spikes in the Chiefs popularity throughout the season in the graph above The first blip is from the Monday Night Football game against the San Diego Chargers and the final blip is the wildcard playoff game against the Baltimore Ravens. So it looks like any time the Chiefs are a national story, more people will use them in Madden.