Escobar's performance in 2012 finally conjures images of the prospect everyone once believed he might become.

Signing for a measly investment of 33,000 as an international free agent in 2003, Alcides Escobar worked his way through the Milwaukee Brewers system and was considered their top prospect in 2009 and 2010, even starring in the futures game in '09 where he led off and went 2-4.

Always regarded as an elite defender with plus speed, his bat has always been the tool in question. Showcasing a little more pop in '08 for AA Huntsville (8 home runs) had the Brewers scouts in belief they had more than just a light hitting gold glove caliber defender on their hands. He posted solid numbers in AA and AAA , even with lack of plate discipline. The potential of 10-15 home runs and 30 + stolen bases annually seemed to be the consensus within the organization when projecting his prime.

Other organizations thought highly of him as well. General managers sought after him, calling about his availability. J.J Hardy was posting big numbers at the time and Escobar was blocked. The club had a decision to make regarding the future of the position. A trade seemed imminent.

Hardy struggled in 2009 and was demoted to AAA in August, giving their heralded young prospect an opportunity to shine on the big stage. He batted .304 in his 38 game stint. They saw enough to be convinced he was big league ready and moved disgruntled Hardy to the Minnesota Twins in November. He wasn't quite as impressive the following season. Proving to be a stellar defender, and stolen base threat, but struggling most of the season at the plate. He finished batting an unimpressive .235, while displaying little thunder in his bat producing four home runs to go along with a .326 slugging percentage.

No longer considered untouchable, he was a trade chip for the Brewers to offer when deciding to go "all in" to solidify their rotation in their pursuit of a championship for the 2011 season. He was a key piece in the package that acquired Zack Greinke. (They also traded for Shaun Marcum, shipping the up and coming Brett Lawrie to the Blue Jays.)

Escobar flashed the leather all season in his Royals debut campaign, leaving the fans with plenty of web gems to admire, while saving a lot of runs for the staff in the process. He stole 26 bags in 35 attempts. He finished the season with a meager .254/.290/.343 line at the plate, yet to live up to his potential with the stick. When all considered, he had a mixed bag of success.

A look into some of the sabermetrics according to fangraphs for his one-plus years in Royal Blue: He finished with a 2.2 WAR (wins above replacement player statistic that factors in the bat, base running, fielding) last season, which was in the bottom half of the league among regulars at his position. He's currently in the middle of the pack this season with a 1.2 war. (Ahead of Derek Jeter currently.) They're downgrading his glove this season as he's near the bottom in all defensive categories, which is difficult to comprehend. (I don't value the defensive metrics much.) He was near the top in range and ultimate zone rating last season. His BABIP (Batting average on balls in play) is .366 this season. It was previously .285 and .264 in his previous two seasons. Let's hope he's starting a new trend and regression closer to his previous campaigns or the big league average won't be in store for post All-Star break.

Is he finally starting to live up to some of the expectations that were set for him when he was the #19 prospect in all of baseball in 2009? It looks that way, especially when you take in the sabermetrics with a grain of salt. He's enjoying a break out season, not only is he atop the shortstop leader board in batting average, he only trails Ian Desmond in doubles. (Currently tied with Mike Aviles for the AL lead with 19.) He's compiling an impressive .315-353-427 line to go along with 12 stolen bases thus far. All-Star voting ends Thursday at 11:59 ET. Let's show our support and cast some votes. 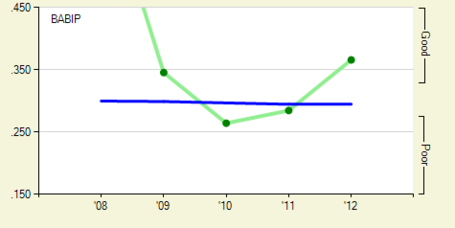 For more info on the Royals and Escobar's season, check out Royals Review.