The 2011 Big 12 tournament is nearing the tip-off time of 11:30 a.m. (CT) for the first round game between the Nebraska Cornhuskers and Oklahoma State Cowboys. Nebraska is a small 1.5 point favorite entering the bracket as an eight seed to Oklahoma State's nine seed.

We've picked the Huskers to win. I feel that their defense should be enough to win today which will pit them against the Kansas Jayhawks in round two. History over the last few years, though, says it'll be Oklahoma State. While Nebraska did beat them this season, OSU had won the previous five games.

Nebraska doesn't have many individual stars but collectively they were an excellent defense ending the season sixth in the country in field goal percentage defense and 12th in scoring defense. They didn't, however, place anyone on the All-Big 12 defensive team.

The two teams will tip-off shortly at Kansas City's Sprint Center. It's four games on Wednesday, four games on Thursday, two games on Friday and the championship game on Saturday.

Here's the view from the Sprint Center before the Nebraska-Oklahoma State game (via @rmattwill): 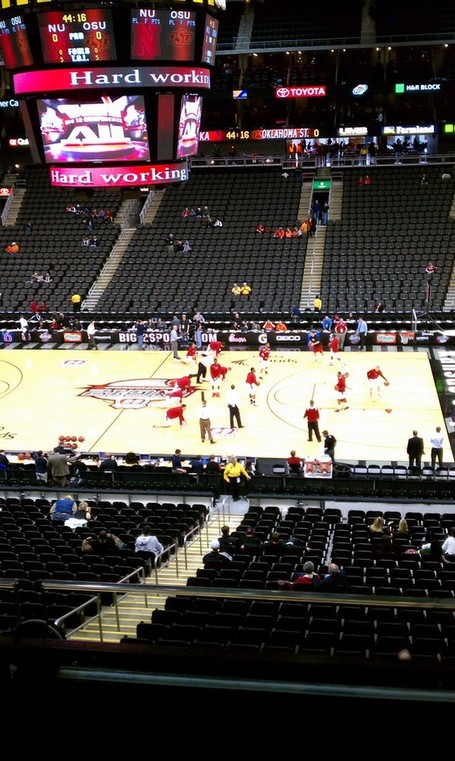