As everyone here knows by now, on Monday the Kansas State Wildcats upset the No. 1 Kansas Jayhawks at Bramlage Coliseum. K-State looked simply awesome against Kansas, running the court well, playing smart and letting Jacob Pullen take over the game.

Kansas State has had a forgettable season to this point. They were a preseason No. 3 team in the country and now stand at 17-9 on the year and unranked. I don't know what will happen to Kansas State the rest of the year but, judging by their entire season, it'll probably include some inconsistency and a disappointing ending.

They don't, however, want to forget the victory over No. 1 Kansas. That's why Kansas State is now selling DVDs of the Wildcats victory -- only $19.95!

A photo of the DVD is after the jump. What do you think about K-State selling these? 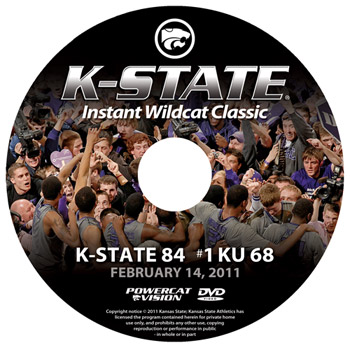