The Kansas State quarterback has officially arrived on the national scene as the Wildcats top the BCS rankings.

The Kansas State Wildcats have now officially arrived on the national scene with the unveiling of the latest cover of Sports Illustrated. Collin Klein is the subject and while it might not seem like that big of a deal, it's a huge move for a team that's consistently been in the shadow of other national title contenders despite their impressive record.

That's what comes for a team with a quiet, steady head coach who recruits from the JuCo ranks and positions his players to be better gentlemen in life and not just for the camera. Klein has been a solid citizen in addition to a great player and it's that approach that sometimes keeps the Wildcats from the attention that they deserve.

Now that Klein has made the cover, it's clear that the national respect for K-State is there as a program and for Klein as a player. It should be because Klein could not only be the quarterback of the national champions, if they continue to win, but also a Heisman Trophy winner when all is said and done. 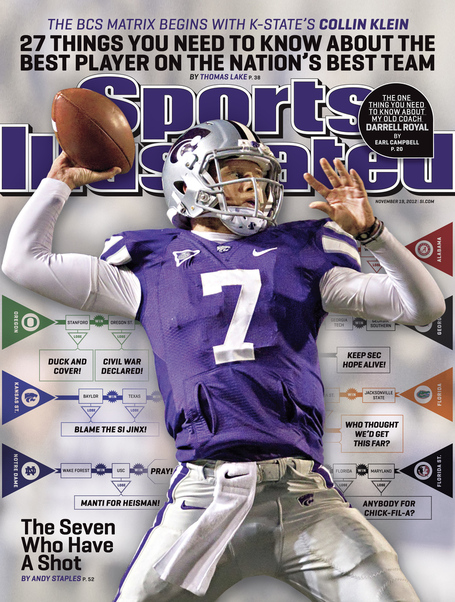