Insight Bowl: First Shot Of The Field For Missouri Tigers Vs. Iowa Hawkeyes

Share All sharing options for: Insight Bowl: First Shot Of The Field For Missouri Tigers Vs. Iowa Hawkeyes

The Missouri Tigers will play the Iowa Hawkeyes in the Insight Bowl on Tuesday evening. The game will appear on ESPN at 9:00 p.m. (central) and will be played in Tempe, Arizona. Mizzou is a three point favorite (depending on where you look) and they're my pick to win the game, 34-24.

The national spotlight will be on Missouri which means you'll be hearing some more about guys like QB Blaine Gabbert and DE Aldon Smith. Their names have been in the news lately with 2011 NFL draft rumors and a strong performance on Tuesday night could help them make their decision to go. Likewise, a poor performance could be what gets them to stay.

Here's the first shot of the field from the press box, courtesy of Dave Matter: 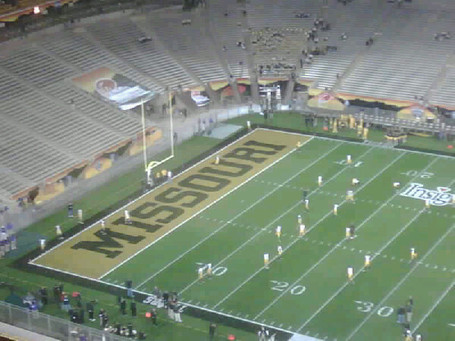