Missouri was a surefire done deal to join the Southeastern Conference - at least on October 22. SB Nation's own Bill C. broke this colossal flub late last night, as the SEC's official athletics web site contained pages the included the official welcoming of Mizzou as the conference's 14th member, complete with a history of the university, fun facts and photos.

The exact purpose of the material is unknown - did a web administrator with an axe to grind implode the SEC's best laid plans? (we kid, we kid: these plans have been terrible) Or was this an accident? Or a finely laid ruse for purposes we can't exactly glean?

We like to think the SEC has taken up viral marketing. The same kind of "leaks" and placed clues helped build hype for everything from Nine Inch Nails albums to the last Batman film. Any day now a decipherable code will appear across multiple Tweets from Charles Bloom that, when broken, read "GARY PINKEL." 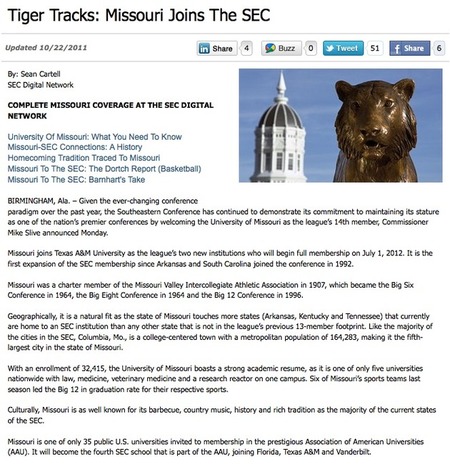