A blog named Mizzou Uniforms 2012? (how's that for niche readership!) has taken apart Missouri's official "tease" video featuring former star wideout Jeremy Maclin's reaction to the new Tiger football uniforms being revealed April 14. That's right: every blurry jump-cut and tightly framed tease of gaudy fabric is broken down for you to pore over. Check out each detailed shot here, but be warned: speculation abounds Mizzou might be invoking the curse of the Cincinnati Bengals by incorporating Tiger stripes. 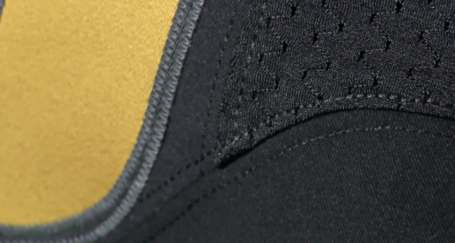 SPOILER ALERT: MIssouri will look a lot like Oregon.

SPOILER ALERT, v. 2: That will inexplicably and indescribably piss off Alabama fans.

SPOILER ALERT, v. 2.1: Henceforth, Missouri will be officially known as "those Yankees."

Our hope? That Maclin's reaction is genuine, and in concert with the marketing campaign of blurry, teased shots of the new duds, Missouri is actually outfitting their players as Cloverfield monsters for the 2012 season, which means they'll be briefly unstoppable and define our cultural zeitgeist before becoming completely irrelevant and forgotten totally (because J.J. Abrams creates the rare kind of popcorn flicks that deserve - nay, demand - sequels, and then he leaves us high and dry).