Y'all Ready for This? Mizzou Enters SEC Play This Week

Mizzou takes on the Georgia Bulldogs Saturday night in CoMO. Brian McGannon previews the matchup and recaps SEC East action. Are the Tigers ready to send an early message to the SEC?

Share All sharing options for: Y'all Ready for This? Mizzou Enters SEC Play This Week

Clean out the turkey fryer, bust out the Kentucky Gentleman, stock up on the ginger ale and strap on the cowboy boots, Mizzou fans. We're here. A weekend that's been in the making for over a year now. There's also a pretty big football game if you guys hadn't noticed.

As if this game couldn't have gotten any bigger, Sheldon Richardson called out the Georgia Bulldogs for playing what he calls "old man football". First off, I love that the Tigers, especially maybe the best player on the team, aren't showing any apprehension to the first SEC contest in Mizzou history.

Outside of the symbolism of the game and overall awesomeness that will become Columbia, Missouri this Saturday, there is a monumental football game with gigantic SEC East consequences. Mizzou's incredible first quarter against Southeastern Louisiana and Georgia's struggles with Buffalo point to a game that may fall in the Tigers' favor.

At last glance, the line is set at Georgia (-3) with 88% of bettors picking UGA. If they only knew what we knew.

Outside of this monumental matchup slated for Saturday, I was not impressed at all with the rest of the SEC East.

South Carolina looked absolutely flat against Vanderbilt. How a team can have the best offensive and defensive players in the country can look so poor against a team like Vandy is beyond me. But don't get me wrong, Vanderbilt is a much better team than they were last year, I just don't see them giving many teams in this division any trouble.

Kentucky...there's not much I can say, I can only really show you... 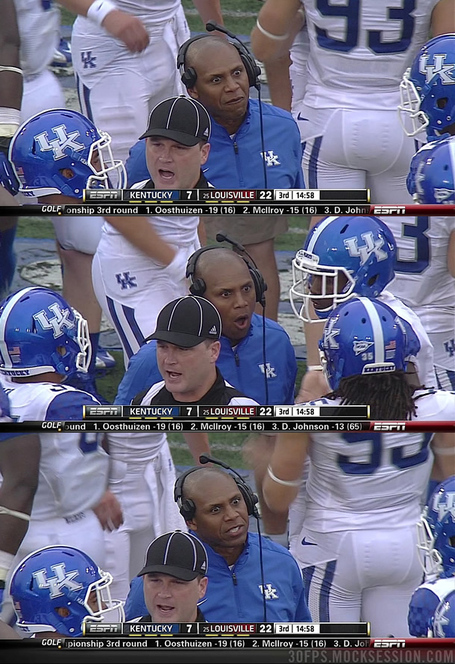 Florida...well Florida has a quarterback situation that would make Herm Edwards circa 2008 blush. Whatever is going on in Gainesville, it ain't good. One would think that the Aggies are going to definitely help out their former Big XII brethren with a win in College Station this weekend.

I know it's pretty absurd to get excited about a 52-point win over a team that plays in the same division as Sam Houston State, but the defensive front seven looks as good as Dave Steckel's rain-soaked biceps, James Franklin made some outstanding throws in the red zone and handled the offense fine with a torrential downpour at Faurot, Marcus Murphy reminded everyone why he was originally thought to be better than Henry Josey and no one got hurt.

Heading into this weekend, things change quickly. A win over the Dawgs and Mizzou is catapulted into the top 25 and immediately considered a serious contender for the SEC East crown and perhaps a date with Alabama in the Georgia Dome come December. That's way down the road, but this game against Georgia is the on-ramp to the highway to Atlanta.