The cards have been dealt and it seems they have given us a better hand than last season. Why then is everyone so glum all of a sudden? I will proceed with some cautious optimism to lighten your bleak chilly summer.

The alarm bells are ringing, the footsteps are heard as we are run down, and panic has set in throughout the bi-state area. The once invincible Sporting Kansas City has fallen down into the plebeian doldrums that maintain a fierce balance in the ever competitive Major League Soccer. Meanwhile, out East and West our patrician overlords have requested that every active soccer player over the age of 35 who has ever been heard of request to duty in their push to set records in both salary and dysfunction.

There are things to have the utmost terror of and they are occurring in remote regions. Los Angeles has found out that they should have played this year just as last year, and also regained the unfair advantage of a player that should be in Europe right now. Omar Gonzalez was all but gone, but was hacked down by known American patriot Timmy Chandler. In Houston, they have found the new park aura and miraculously have bounced back to the top of the Eastern Conference. We will see them once more at home, so don’t get too worried about them being even with us at this point. Montreal just signed a DP, Alessandro Nesta, then ripped off the New York Red Bulls' arms and beat them to death just like a Wookie should (photographic evidence below). New York may not be the sum of their parts, but the parts sure are pretty. 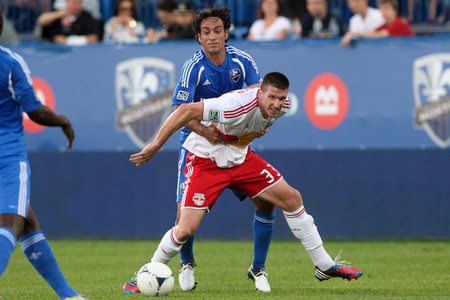 The questions abound in the media. Why isn't Sporting Kansas City rising to the occasion and buying all of these fabulous NASL wunderkinds looking to live out their glory days in 100 degree heat in a Midwestern town that shares many similarities with European cities but is not one in any way? Sorry, every potential DP lost interest when you asked what they thought about 100 degree temperatures and they thought of boiling water. Secondly, they also have two images of the United States, Los Angeles and New York. Hell, Freddy Ljungberg freaked out about Seattle, and that place has essentially hipster London weather. Montreal may not seem like a destination but the bilingual status makes it seem cultured and worldly. Kansas City's culture is mistakenly maligned due to some poor PR from the movie Casino that makes us all appear to be gangster criminals. (Not true, Italians hate Joe Pesci.) It probably would have served them some Fats Domino promises that pretty women will "give you some".

In reality, sans injuries, what move do you make to improve this team? Do you get a replacement for Roger Espinoza, who will be back from the Olympics after Honduras magic run ends next week? Do you add center back depth? (We somewhat already did this.) Do you go for a striker given our young talented players disappearance over the past two months? Or do you go for that true winger that Bobby Convey never really became in 2012?

In honesty, they did try to sign some Spanish players, but nothing went through before MLS's arbitrary** deadline. (If Garber spent less time worrying about policing the fans, and more time adhering to international transfer calendars we wouldn't be having this problem). Save injuries to Aurelien Collin, form issues from Teal Bunbury, Roger Espinoza's dream run into the quarterfinals, and the summer expulsions of Julio Cesar and CJ Sapong from any role on the team, nothing is troubling this team. I'll concede that this isn't exactly a small list of problems, but some of it may be form and at some point it has to be laid at Peter Vermes feet.

The happenstances in the departures of many players over the past years has been an odd refrain in his tenure. Even with Jacob Peterson and Bobby Convey's contributions this year, it wouldn't be too much of a stretch to imagine how much better Omar Bravo would make this club after one year of gained experience. The strange disappearance of Julio Cesar, an early-season regular and Vermes' terse comments regarding his status stand to give this viewpoint more credibility.

But why fret over a team that is playing better than last year and is arguably still one of the league's top five-six teams. Sure, at one point we thought they were invincible, and at times that still shines through. It may also be that when Sporting KC gets to the playoffs, they will shine. Their struggles so far have come against bottom of the table teams, which makes them all the more infuriating but also gives hope that they play to their competition. The standings still paint a rosy picture but there are a few details that do give some thought.

While the gap from third to sixth isn't as vast as the divide in the West, Sporting is comfortably clear of the pack at the moment. With twelve matches remaining they only need slightly more than a point a match to reach last season's total of 51 which won the East. Just nine more (46) matches the total that earned New York the final playoff seed last year as well.

In reality, by the US Open Cup final, they should have their entire team back. At that point, it's going to be a nail-biter to the finish on the race for the first seed, but us fans shouldn't worry too much about playoffs. After the aforementioned final, the summer congestion ends and MLS regular play continues for all of the Eastern teams (Toronto is in the CCL, but out of the picture). No team has demonstrated yet that they equal to Kansas City's squad at full strength and stamina. It may be over the horizon, but the sun is bound to shine on this team soon.

*Note: Then, something did go through after the arbitrary deadline making it seem even more arbitrary. Sporting KC signed 20-year-old Oriol Rosell, who if his youth signings indicate anything might be pretty good. He was signed by Real Madrid at 12, went to RCD Espanyol, and spent the last few years at the legendary La Masia before being called into Barcelona's B squad, which is usually one of the top Segunda division teams (cannot be promoted to La Liga).